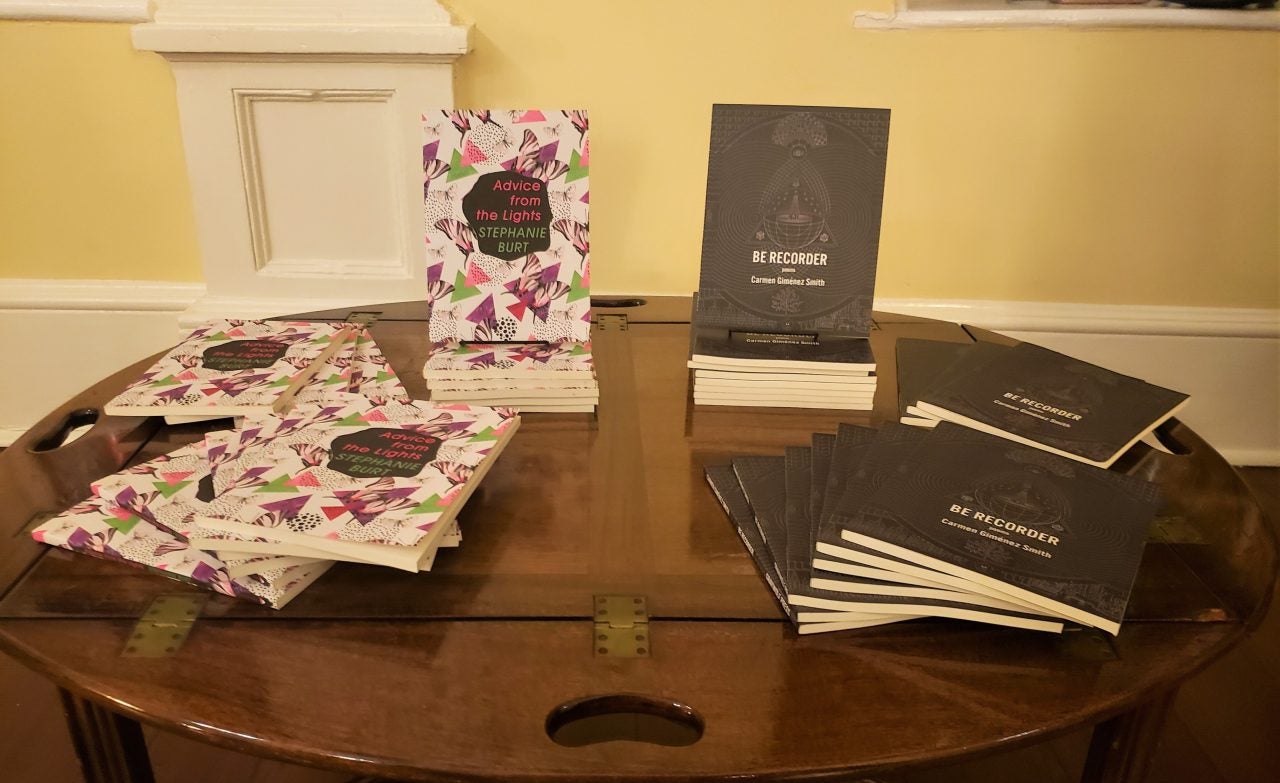 As part of its annual reading series, Crazyhorse welcomed esteemed poets and co-editors of The Nation’s poetry section, Carmen Giménez Smith and Stephanie Burt on February 27. Giménez Smith and Burt each read a selection their work and held a joint Q&A session at the College of Charleston.

First-year MFA poetry student Joshua Garcia introduced Burt, describing her work as “crafted with a care and beauty that feels breathless … with a force of energy that cannot be stopped once it has been ignited.” He praised Burt’s most recent book of poetry, Advice from the Lights, as an expression of both vulnerability and strength which explores such topics as childhood, gender, and self-identity, often through the use of persona poems. Burt began her reading by providing some context on the release of Advice from the Lights, stating that it “is sort of my coming out book. … It went to press while I was doing fun things like legal name changes. It’s full of talking objects. A lot of talking objects. You know, snails and small mammals are queer in different ways. And I realized after the book came out, that they were almost all alone. And I want the next book to have other unlikely pop cultural and talking object speakers who are different versions of queer solidarity.”

Burt first read her poem “Frozen is the Most Trans Movie Ever,” which combines prescient commentary on pop culture, gender, sexuality, and Disney princesses through lines about compulsory heterosexuality, deleted scenes where the “chaste male lead” pretends to be “a fisherman from mysterious lands,” and the realization that “life on Earth depends on the anomalous fact that liquid water contracts while ice expands because what matters the most or maybe just what matters first is not who you want to kiss, but where you can hold hands.”

Other poems that Burt read include a poem on her favorite X-Men couple which was also a hybrid of Sappho 31, and works from her most recent book including “White Lobelia” where “we tell ourselves  / and one another that if you listen / with sufficient / generosity, you will be able / to hear our distinctive and natural sound.” She also shared a poem from her upcoming book, After Callimachus, which is a series of translations, adaptations, and re-imaginings of work from her favorite ancient Greek poet.

MFA poetry student Ivy Keller then took the podium to introduce Carmen Giménez Smith. She stated that Giménez Smith’s work, both poetry and non-fiction, “engages in crucial discourse on the subjects of race, gender, motherhood, and self-identity” and “performs the necessary and difficult work of disrupting historic systems of racial and gender oppression, both within the literary sphere and society at large.”

Giménez Smith read a selection of poems from her most recent book, Be Recorder, starting with “Only a Shadow.” She dedicated the poem to her daughter, who “is now the pulse I toss into the wind with the seeds. Particles / of us pass over like whispers through the cosmos, upon the clatter / the wind makes.”  Giménez Smith followed this with several poems considering questions of ancestry, inheritance, and self-identity.

She closed the reading with her book’s titular poem, “Be Recorder,” invoking the image of “a monolith overshadows the animals / in their boxes stacked so corners stick / into corners of others for morale  the animals / think about a next life while the monolith smothers / reality …”

Following the readings, Giménez Smith and Burt jointly answered questions from the audience on such topics as poetic form and political commentary. When asked a question about avoiding the need to educate a largely straight audience as a queer poet, Burt answered “all of the poems that I’m happiest with have dual audiences. There are Easter eggs,” adding that not every reader will understand every reference. Giménez Smith also spoke on being a poet while navigating society’s complex systems of oppression and privilege, and how a major goal of her book was experimenting with different ways the lyric voice can accommodate political commentary. When asked how she avoided “crossing the line,” she shrugged with a smile and responded, “Where is the line?”