Scott Gould: Writing What You Know Well Enough to Lie About 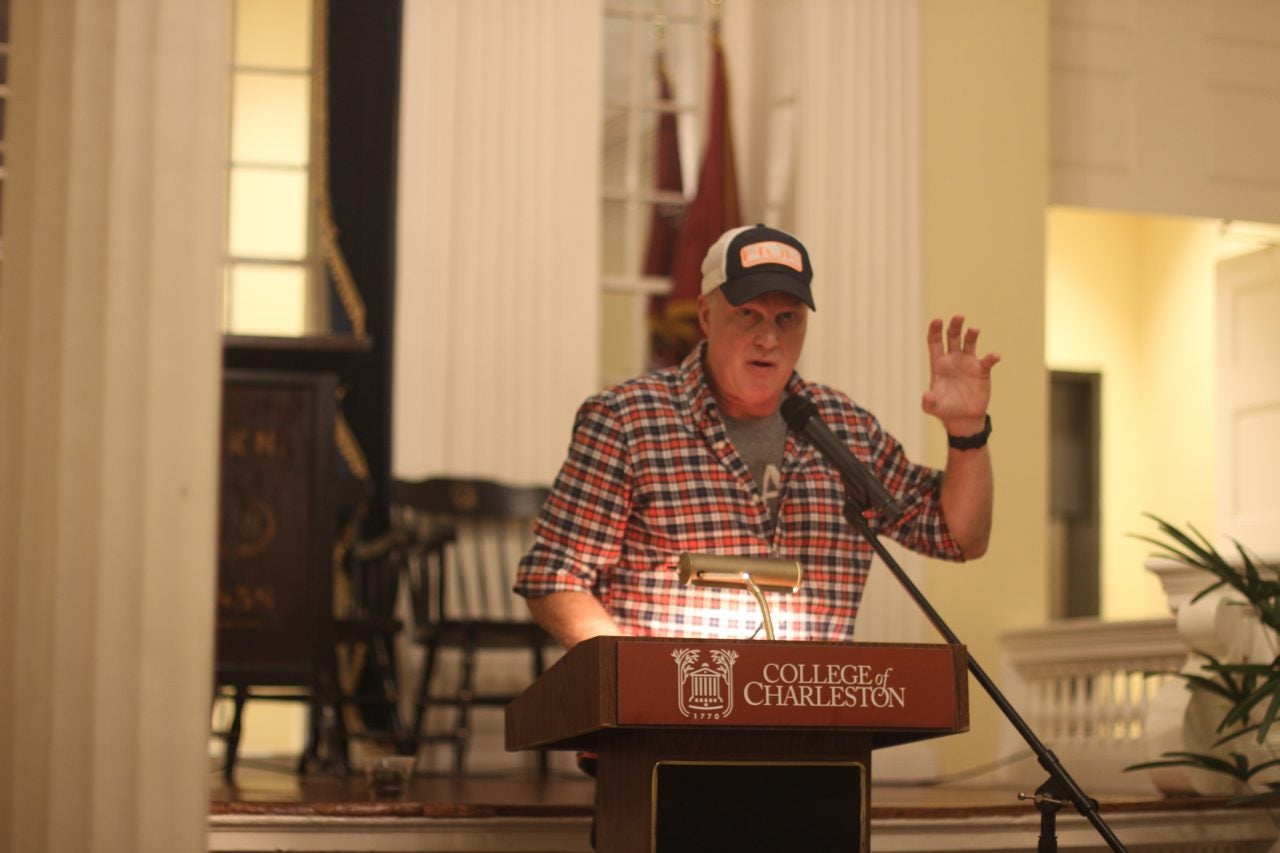 On Thursday, October 26th, author Scott Gould visited the College of Charleston for the 2017 Crazyhorse Reading Series. Bret Lott, Professor and Director of the M.F.A. Program in Creative Writing and nonfiction editor of Crazyhorse, introduced Scott. The two authors have a long history of friendship beginning back in 1987 when they taught alongside one another at Governor’s School for the Arts Summer Program. “The thing I knew then, and the thing I know now, is that Scott is a writer who’s committed to writing,” Lott began. “And is also committed to teaching.” Gould currently holds a teaching position at the South Carolina Governor’s School for the Arts in Greenville, a two-year boarding school for high schoolers who wish to receive an intensive education in the arts. The program allows emerging artists to spend their last two years of high school concentrating in creative writing, dance, drama, music or visual arts.

When Gould approached the podium after Lott’s introduction, he appeared easy—so easy, actually, he looked like he could have dropped everything for a last minute fishing trip. He acknowledged a group of students at the reading that came to College of Charleston after leaving the Governor’s School, joking, “They never call, they never write.” This sense of humor, present both in his commentary and his writing, created a relaxed, almost nostalgic, atmosphere in Alumni Hall.

Strangers to Temptation, Gould’s debut book, takes the reader down to the Lowcountry of South Carolina. Set during the 1970s, the interwoven narratives follow a young boy as he recounts the often awkward obstacles of adolescence. “I thought it was interesting to compose a book around somebody facing all the confusions and trials and tribulations and ups and downs of coming of age,” Gould said. He admitted a part of his motivation to write the stories stemmed from a rejection from a well-known literary magazine, when an editor informed him the world didn’t need any more coming of age stories. “I said—I’ll show you!” Gould laughed. “I’ll write a whole book of them!”

Gould read from a story in the middle of Stranger to Temptation entitled “What Gets Tossed.” It introduced the narrator as a boy struggling through preteen-hood, navigating confusing subjects like girls, sports, puberty, and friendships while still attempting to bond with his frequently absent father. During a camping trip with his father and his friend Lonnie the narrator admits quietly that he’s broken up over a girl who doesn’t reciprocate his feelings of affection. “Now we’re getting somewhere,” The narrator’s father says. “Heartbreak and rejection.” Gould describes the collection as semi-autobiographical, with certain elements and characters based on his own childhood in Kingstree, South Carolina. During the question and answer portion of the reading, Gould was asked how he got the idea for a story about a boy who takes a tumble from a bridge and, as a result, needs a prosthetic eye. “You know, if you write, you steal,” Gould responded. The character apparently evolved from a conversation he’d had with his ex-wife about a patient of hers with a similar circumstance. “I said, ‘I’ve got to use that in a story someday.’ Grand larceny is nothing new to writers…you hear a good conversation, you see something on the street, that’s going to make it into a story.”