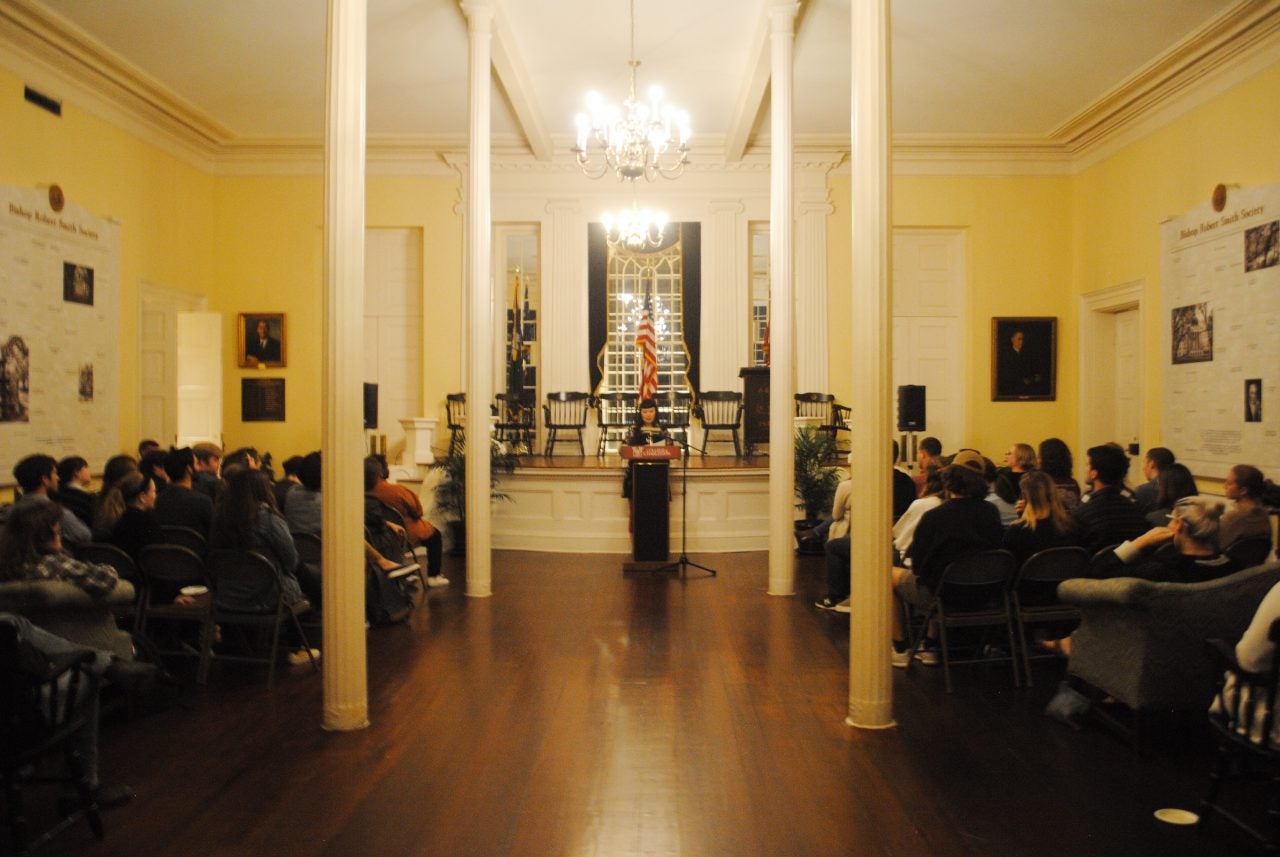 On Thursday, October 25th, poet Mary Biddinger gave the first Crazyhorse reading of the academic year. The timing felt fitting. Only days before Halloween, Biddinger joked about being a witch and described the “witchy-ness” and magical elements that contribute to compiling a book of poetry. Second year poetry student, John Byrne, introduced Biddinger and noted that great poems, “render reality as vividly as a mirror that manifests the mundane so as to make it suddenly strange.” Biddinger’s poems, he specified, “shirk their risk management memos and take the risks of making life somehow bigger, somehow more than it seems.”

Biddinger rose to the podium and responded warmly to Byrne’s introduction, remarking, “It’s so nice when you write poems and somebody actually gets it.” She began her reading with “Risk Management Memo: A Star Is Born,” which was previously published in Crazyhorse no. 83. As part of a job in the nineties, Biddinger authored a number of risk management memos. These memos covered subjects ranging from lead paint to international travel and served as inspiration for many of the poems in Biddinger’s collection, Small Enterprise.

This creative need to grab the mundane and recreate it poetically shines through in Biddinger’s poems. In “Book of Disclosures,” she stated the importance of recording snippets of the day with.“You know, you have a wonderful dream about corn and you wake up and you don’t write it down, and then you’re like, ‘Oh what was that image about corn?’”  She then went on to joke that, in the poem, “there’s corn… so I hope you’re not allergic.”

When asked about her revision process, Biddinger discussed the importance of being able to pare back one’s work, providing the metaphor, “Maybe you take that one pair of jeans you haven’t worn in five years and put that in the bag, and donate it to the Salvation Army.” As important as trimming down work is, Biddinger extended the metaphor, “But then, of course, I pick up a bunch more things when I’m there,” essentially arguing that poets inherently gather more—objects, experiences, and observations—to write about.

She also touched on the need to occasionally “detach yourself from language.” In a response to a student asking if Biddinger had a physical or mental space she visits when struggling creatively, she explained, “As I was flying over this beautiful land here, I saw that you have a lot of trees, and where I go to sort of find some peace and to get myself back to the place where I can write, is outdoors.” While nature acts as a good remedy, she stated that taking a break from her phone and social media offers additional relief.

When asked about the leaps in associations and images in her poems, and how she ties them together, Biddinger spoke on intention in the poem, suggesting that “it’s one of those things where you have to, in your aesthetic, switch back to communicating with people.” She noted that, the more narrative driven and literal her work, the more likely she is to use prose. In her earlier books, she wrote lyric poems when she wanted to be “more associative and kind of weird.” On her style, she said that she is “never aware that there’s any kind of associative leap between things, because naturally you go from birds to cheese.” She remarked that, despite the desire to communicate, “I think it’s just an issue of what each, individual poem is looking for and what the subject might be.”