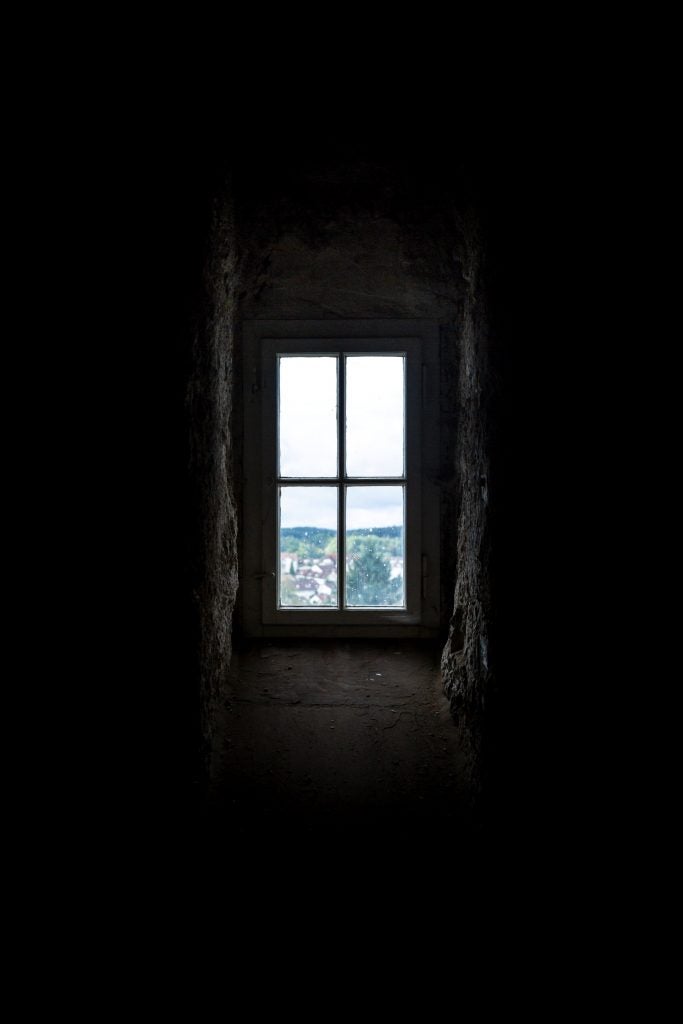 Heart with Windows but No Doors by Nasser Rabah

He sang the song . . . remembered the tune completely.

like darning garden’s air, pouring his spirit on the wall as rhymed dust.

Confusing the details of a rose striving to remember his names.

How did his chest bear

O those who die each day accidentally cannot disturb a catastrophe.

Do not pause to nap on the fence

Smile for the road to make sure it does not see Fatiha* in your wounds.

Tear off your usual day, throw it through the window, exactly under

It is, however, one day.

I saw a cloud running. I followed it till I lost my home.

I saw a road descending, I gave it a rifle, and returned

without legs. I saw a lost woman draping on her fingers

the clothes of the wounded. I stoned her with a stone of weeping. I saw

songs pouring from a pale Mirror and I got tired,

I slept. Who cares about a mirror in sleep!  Who

cares for singing when returning pale because of war?

Why do you cough details of things in the night?

My sunken ships are awake. The sea tucks them on my heart’s bank,

singing again and again the names of the dead like an anthem.

I try not to blush even when it speaks my name.

knotted with history books as anchors?

the tide stole my country,

Why are details of things coughing in the dark? Insane rains of doubt

sneaking through a neighbor’s window to swear at me?

As I swear at him. The clock is frozen.

I am accused of ploughing night water.

Behind me cough medicine pours out.

*From the first Sura of the Quran

Nasser Rabah is a Palestinian poet born in Gaza. He has published several books of poetry in Arabic. In the United States, his work has appeared in journals such as Poetry International, Two Lines (Center for the Art of Translation), and elsewhere.

Saleh Razzouk was born in the Aleppo province of Syria. He was educated at Aleppo University, Gliwice Polytechnic of Poland, and several universities across the UK. He is primarily a fiction writer with a strong interest in translation from and into Arabic. Among his translations is a study on the Arabic novel by Win-Chin Ouyang. Currently he is associate professor at The University of Aleppo, Faculty of Agriculture, Fiber Science section.

Philip Terman’s books of poetry include The Torah Garden (2011), Rabbis of the Air (2007), Book of the Unbroken Days (2005), and The House of Sages (1998). More recent publications include new and selected poems, Our Portion (Autumn House Press, 2015); a selected Arabic translation of his work, My Dear Friend Kafka (Ninwa Press, 2015); and a hand sewn chapbook in collaboration with the artist James Stewart and the bookbinder Susan Frakes, Like a Bird Entering a Window and Leaving Through Another Window (2016). His poems have appeared in many journals and anthologies, including Poetry, The Georgia Review, The Kenyon Review, The Forward, The Autumn House Anthology of Contemporary Poetry, and Blood to Remember: American Poets on the Holocaust. He is the recipient of the Kenneth Patchen Award, the Sow’s Ear Chapbook Prize, and the Anna Davidson Rosenberg Award for Poetry on the Jewish Experience. He teaches creative writing and literature at Clarion University of Pennsylvania, where he directs the visiting writers’ program.