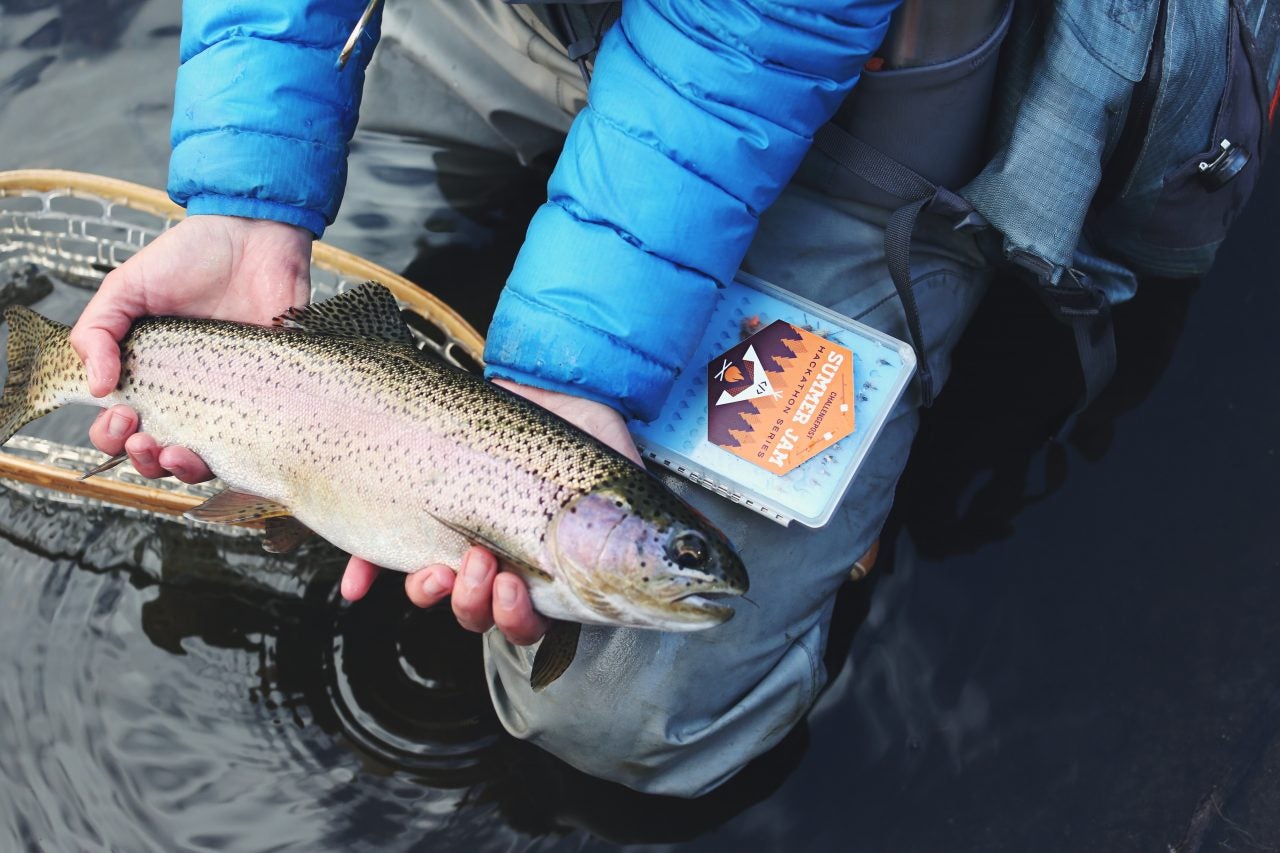 “It’s a bad catch,” you say. You are ten, thin and tall, all angles and sharp bones. The lure you’ve been using has three hooks, and one is caught in the bass’ gills. You hold the fish in your hands, then sit on your haunches. You know you have only a minute or so before it needs to go back into the water. You pinch at the hook, trying to work it out of the fish’s body.  The sun has set over the lake, and everything around us, the forested promontory to our right, the road that follows the curving shoreline, the lodge behind us, softens in the waning light.

“The pliers,” you say. I find them on the dock, like your surgical assistant, and hand them over, handles toward you. Your face is bunched up as you squint at the fish’s underside. You push the pliers into the fish’s gill, and then rotate your wrist as you tug, but the hook won’t budge.

Earlier in the day, a local walked over to you as you fished on the dock, and gave you the lure. The man appeared to be in his late fifties, perhaps on a weekend getaway, perhaps retired. He had been sitting on his boat for most of the afternoon, one bare leg flung over the white hull, while his wife and teenage daughter struggled on paddleboards in the middle distance. After your tenth or so catch, he yelled across the dock to me. “You got a fisherman there,” he said. I nodded, all that pride I hold for you surging up into my chest and face until I smiled. You didn’t seem to notice, though, too busy with the fist-sized perch you had just pulled out of the water.

A few minutes later, the man hopped off his boat onto the dock and approached you. His hand was closed around something he then extended to you. “Here you go. This is how you’re going to catch a bass,” he said. “It’s a top skimmer. Use it tonight or early in the morning. You’ll catch something big with it.” You took the lure in your hands and turned over its red and black body to examine its underside, with its three sharp hooks. I nudged you. “What do you say, Ian?”

“Thank you,” you said, but your eyes stayed on the lure. There was glitter in it that caught the sunlight. It looked like candy, the kind you always order when we go to the movies. You placed it on the dock for the evening, when the big fish bite.

You caught the bass on your first cast. Your rod bowed and shook, the line taut with the weight and power of the fish. Your father and I stood next to you, and you turned your face to us, your eyes huge with surprise. “He’s a fighter,” you said, and you widened your stance, braced yourself against its struggle. “Keep steady,” your father said. “You’ve got it.”

When you caught sight of it on your line, you yelled, “Large mouth bass! Large mouth bass!” You hauled it out of the water, and it slapped its tail around in the air. It was silvery, indignant, like it knew it belonged in the lake. You gripped its body, then got it into a lip lock. It soon settled into your hold, kept still when you tilted it to look at the gill where the hook was caught.

The hook, it turns out, is superbly barbed and caught so deep in the flesh that the fish bleeds from its gills.  “Why do they make it that way?” you say. “I can’t get it out.” You drop the pliers and worm your index finger into the open slit where the hook is still buried. A heron glides above us in the gloaming, tips a wing down and banks toward the shore. You make that low grunting sound in your throat, the one you make when life doesn’t bend to your effort and intention.

Your father notices it too and says, “You need to cut the line,” but you refuse, and work even harder on the hook, getting your shoulder into it. You’re breathing through your mouth, and your back is hunched.

“He’s going to die, Ian. You need to cut the line and throw him back in,” your father says again. He steps toward you, bends down like he’s going to take the fish from you. You turn your body away from his, and he stands still. When I step toward you, he stops me. “Let him do it,” he says. “Let’s go inside.” We leave you, and enter through the screened patio that leads into our room. We can see you from inside, but we keep the door open. “He’s got to know this is part of it,” your father says. “Sometimes you’re going to lose one.”

Night is falling like a scrim. Mosquitoes and gnats swarm around the lamps that line the concrete walkway. Right now the sky is clear, but a thunderstorm is supposed to head in tomorrow, and I wonder what we’ll do if it rains. I think about the rest of the evening. We need dinner and then sleep, maybe a cartoon for you in between. And although it’s vacation, I think about the kitchen at home still waiting to be painted, and the school emails I’ve glanced over but not answered. I think about the stories waiting to be finished, the ones that, when I start teaching in a few weeks, might moulder away in the digital universe I’ve left them in. “Be ambitious,” another writer, a mentor, told me recently. “Be relentless. You need to write.” But what I fear, and what I didn’t tell him, is when work begins again, the writing won’t survive. The job takes over with its wheedling and cajoling. And all the decisions, so many decisions, the minute-by-minute ones, and the ones that loom, large and unwieldy, so that by the end of the day, I have no decisions left in me to make.

But that’s not the all of it. Because there’s also you. There’s no letting you go or putting you off, no matter how much I want my writing to be good and ready for the world. I’ve held onto you for ten years now, need you close, elbow-to-elbow with me, because you’re ten and on the cusp of something I can’t quite make out, some wild and inscrutable terrain where I don’t belong. I will lose you to it, but not yet. So I’ve tried to work out the time, scheduled the early wake-ups and late nights, the stolen weekend hours at the computer, fragmented and stuttering, but nothing seems to come out right. How much can you fit into a life, after all?

Your father’s in the shower now, so I push open the patio’s screen door and go to the railing along the lodge’s walkway. The lake stretches out in front of me, glassy and still. I scan the walkway between the lawn and the dock, where we had left you, but you’re not there.

My eyes flicker across the lawn, and the picnic tables, and then I see you crouched on the shore. You’ve cut the line after all, put the bass in the water, but it bobs on its side in front of you and then flips itself around every few seconds. You are crying now and your head is on your forearm. I think to the months leading up to this trip, and how you wanted more than anything to fish this lake, had talked about it all summer. You wanted to catch all of the fish in it, hold them in your hands and then send them back into the water. You searched online, knew the names of the fish that inhabited the lake, knew the set-ups that worked best, watched videos of fishermen on their boats, pulling bass and carp out the clear water, fishing for sturgeon in holes drilled into the lake’s ice during the long winter. “I can’t wait,” you had said. “It’ll be the best trip ever.” And hadn’t it been until now? All those fish you caught, writhing with life when you put them back into the lake, swimming so deep we lost sight of them?

I will always remember this, will come back to it whenever I scroll through the memories of our life together when you were young. It will appear to me this way: I am on the lodge’s walkway and see you on the shore, crouched in your sadness. I stand there, not sure of what to do. I want to tell you everything’s fine, that the fish won’t suffer or that maybe it still has a chance, but I know you know better. And even if I did say those things, they would seem anemic and frail against a hard truth you will come to see, one I haven’t been able to sit comfortably with and never will—that want and pain are tethered to one another, that often you cannot act on passion without sustaining or inflicting injury, and in the most maddening design of all, it’s both in the doing and not doing what you desire that the danger     lies.

Genevieve Thurtle lives in the San Francisco Bay Area with her husband and son. She has spent her entire career as a public school English teacher. This past July, she received her MFA in Writing from Vermont College of Fine Arts, and “Catch and Release” is her first post-MFA publication. She recently completed a collection of short stories titled Aphasia and Days and is currently working on a memoir.