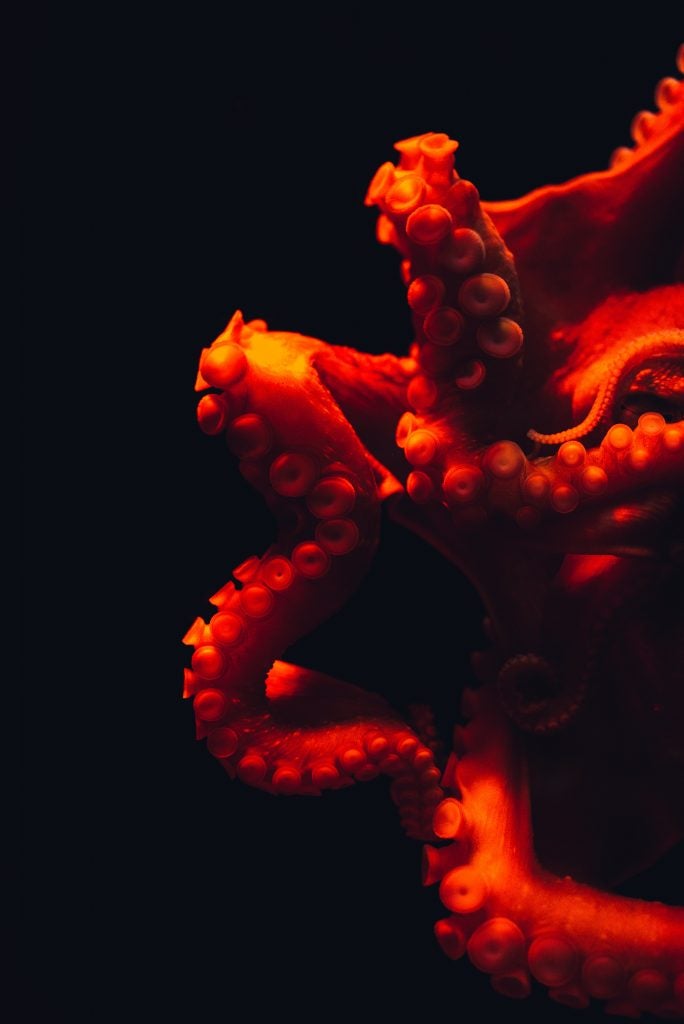 Aleph with All, All with Aleph

And when the storm subsides, the catchbasin
coos; the sky exhales; the dead rosebush withers;
the bright kingfisher paces in the sand.

And all night, the lemon tree remembers
sun. And the bathhouse cradles the salt spring,
casts its bodies in white steam. And the earth

opens for the spade. And the moon jar sings
from its dark womb, holds its breath. And the crow
turns and turns in the blue air. And the sickle brings

the meadow back to earth; the meadow
mourns its shadow. And the aspen shakes
green, red, gold. And all morning, the ghosts

low from the crooks of oaks; the nightjar wakes
to listen. And the father brings his children
to the shore. And the aging clockmaker

thinks, as she must, about entropy. And
the kindling crackles in the marble hearth.
And the octopus sleeps like a stone, changes

color while he dreams. And the lone train car
splits the fog across its nose. And the belfry
shutters its windows, hides its brass heart.

And in the East’s deep ocean, sand lifts—briefly—
as if to carry on to somewhere
new; there, in pools of shadow, so do the

drowned ones lift—too briefly—as if to bear
north, retake the beachhead, wander blindly
into some fresh havoc or wonder or

neighbor at the fair. And the xiphoid spines
of prickly pears erupt in pods of seven.
And the green blackberries dot the green vines.

And the orb weavers have built an open
curtain through which the yellow porchlight spills.
And the icicle falls from the eave like an

apricot. And the coyotes keep their kills
in earthen dens, catch snowflakes in the cold.
And the shoots of blue gramma, of purple

aster, of little bluestem, shiver so
gently in the West’s bare wind. And the moon’s
dull humming makes ripples in the pond.

And the white marble busts of the dead bloom
from their pitch-dark hall. And the willow leaves
brush against barbed-wire fences. And the loon

dives into the lake. And the deep well sees
Lyra, even at midday. And the warbler
parts the lemon of its rind. And the marquis

keeps its eyes in a bronze bin. And the North’s
soft heather cranes to see the morning sun.
And the cube of sugar forgets its form

for the warm black tea. And the mother runs
upon the metal bridge. And when the light
returns to the valley, the kestrel drums

along the bough; the red cedars blush white;
the mu’addhin sings, his voice like a drawn bow.
And the cherry blossoms cut through the night.

And the fishing trawler, arms akimbo,
teeters to shore like an infant. And the cliff
swallows have built their nests of mud below

the chimney’s tin crown. And the South’s cold mist
pours down the rain-wet hill. And the water
bear purrs. And the child leans into the wind,

makes his body large. And the lighthouse keeper
cannot help but imagine. And the skies
above the mountain’s peak are brighter

than the snow. And the temple roof curls wide
to catch the summer rain. And the glassblower
turns the white-hot sphere. And the wet clay shakes alive.

And, yes, the wild zinnia open their eyes.

Daniel Schonning’s poems have appeared or are forthcoming in Poetry Magazine, Puerto del Sol, Guesthouse, and elsewhere. He studies and teaches in Colorado, where he is currently working on a book of abecedarians.