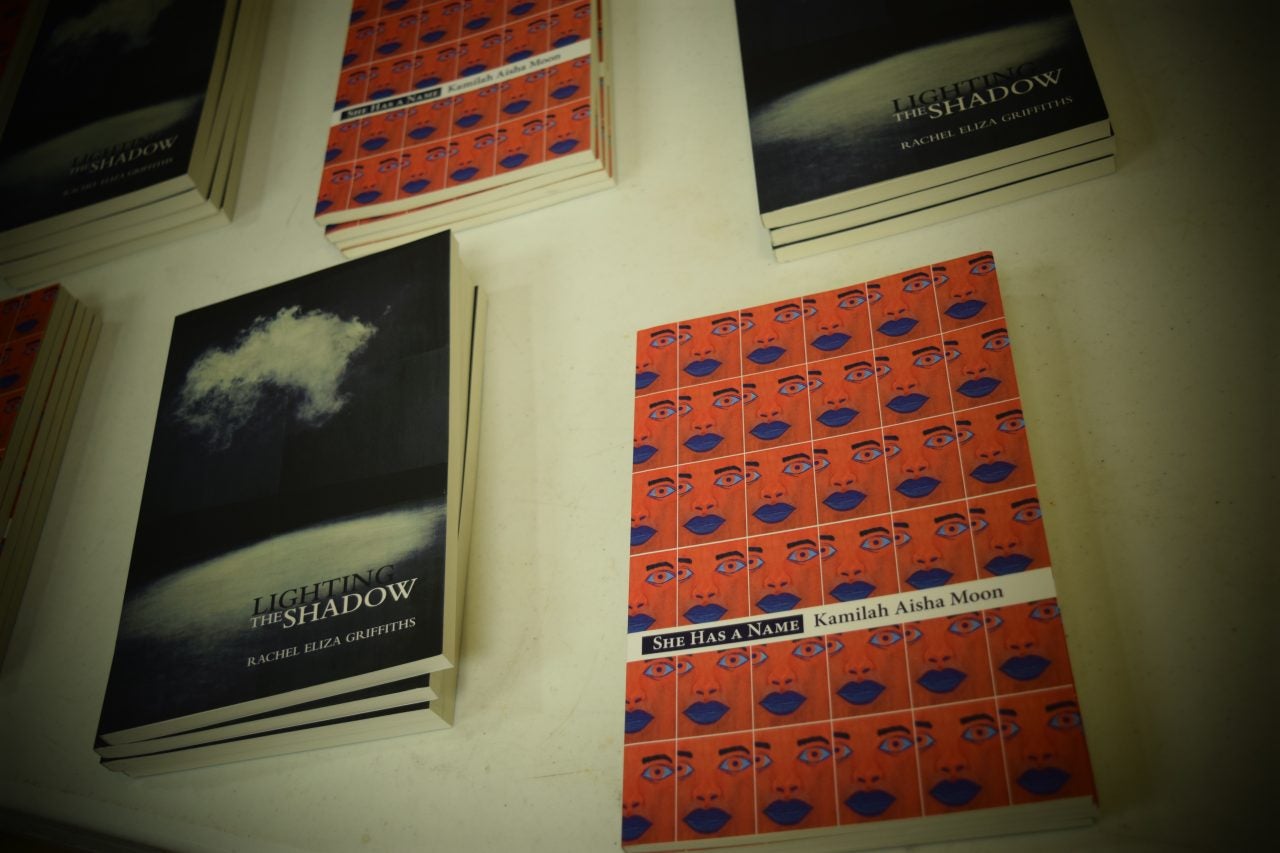 After he thanks the many people who made the reading possible, he extends special thanks to Natalie Diaz, a poet who was scheduled to read, but who was unable to attend.

“Tonight’s origin story started with a text message from Natalie the evening of March 3, 2016,” he says. “This is a direct MLA in-text citation. She texted, ‘OK, brother. Here’s the deal. Invite us for a reading. Rachel Eliza, Aisha Moon, and me.’”

Regardless of Diaz’s absence, the audience is eager and anxious to hear what Moon and Griffiths have planned to share.

Moon is a recipient of a fellowship from Cave Canem Foundation, the Proxima Writing Institute, the Fine Arts Work Center, and the Vermont Studio Center. Her work has appeared in a variety of prestigious literary magazines and journals. She has also won a Pushcart Prize and was a finalist for the Lambda Literary Award. She earned her MFA in creative writing from Sarah Lawrence and has taught at several colleges and universities. Jackson describes the poetry from Moon’s first collection, She Has a Name, as “full of grace, intimacy, and fury, sometimes simultaneously.”

“It may be one of the truest poetry collections I’ve ever read,” he says. “When I say true, I’m not talking about poetry as confession necessarily. I’m thinking more about how the poems in the collection, which take on the voices of people in her family, are doing the difficult work of reflecting the world we live in and the transformative power of trying to distill life into art.”

The family dynamic within the collection is informed by the youngest daughter’s autism. Moon’s own sister has autism, and the poems revolve around how this diagnosis changes and defines their lives.

Moon begins with her sister’s contributions to the book. “I’m very proud that Four Way agreed with me and made her painting the cover art. I want to acknowledge that.”

The first poem she reads, “Borderless Country,” is also the first poem in the collection. It begins with “1 in 150,” the statistic at the time of publication for the number of families dealing with autism. Moon reads the poem revised with the most current statistic, and the difference is staggering.

As she reads, her voice is soft and commanding. Her manner is gentle. She rests a hand on the podium as she holds her book in the other. We listen. We hear her voice and the voices of her family. We hear their grace, their intimacy, their fury.

Before she reads one of her last poems, Moon says, “I hope those who know how to love each other win. We’re in the struggle of our lives right now. I hope we win.”

Then, she reads “Perfect Form,” a new poem about the shooting of Walter Scott on April 4, 2015, in North Charleston, S.C. “Walter Scott must have been a track athlete before serving his country, having children.” Her words are tender, yet scathing, reminding us of the realities we so often choose to ignore.

After she reads her final poem, Moon thanks the audience and Jackson returns to the podium to introduce Griffiths.

Griffiths, a poet and a photographer, currently teaches creative writing at Sarah Lawrence, which is where she earned her MFA. She is also a recipient of fellowships from Cave Canem and the Vermont Studio Center. She has also received fellowships from Yaddo and the Fine Arts Work Center. Her work has been published in journals, magazines, anthologies, and periodicals such as NY Times, American Poetry Review, Callaloo, and Guernica. She is also known for her video project, POP, Poets on Poetry, available online.

Her newest collection, Lighting the Shadow, describes what Jackson calls, “this frayed and haunted Americana rich landscape” that is “both host to oppressors and the oppressed and serves as a constant foil for the multitudes of figures that stand out.”

“Everytime I read these poems,” he says, “I feel like heartbreak is my favorite language.”

Griffiths takes the stage, and as she reads, her low, humming voice is arresting. Her first poem, “The Dead Will Lead You,” is based upon a photo she saw while working on the book. The photo was of a child playing amidst shrouded bodies of dead children in Syria. “I see something inside or I see something outside,” she says. “The poem has this discovery and startling in it, so the poem you thought you were writing about a picture takes you somewhere else.”

Across the landscape of grief, death, and womanhood, Griffiths leads her audience into territory wracked with trauma and invites them to consider the America we live in—“The dead will lead you across scarred meadows, red, blue, white. The star-flung sky scrapes gold grass.”

After reading several poems from her collection, she shares some new works. “Good Death” was influenced by the sudden loss of her mother and by recent shootings aired on the media.

“When your child is lying out on the street full of bullets and bleeding in front of a national international stage, that’s not a good death,” she says.

The dead have led us to her haunting grief, echoing in each line. “Was it a good death? Was there peace for all of us? Why should I want peace instead of my mother?”

At the end of the reading, Griffiths and Moon answer the audience’s questions. They discuss whether poetry should have an ethical message to impart, if poets should write to share their experiences or if they should use their work to educate the reader. “I’m not a fan of the sitting down and saying, ‘I have a message to impart,’” Moon says. “But I think that naturally happens when you sit down to write about your life and what you observe.”

Instead, Moon suggests for the poet to sit down at the desk and say, “Let me communicate, let me connect.”